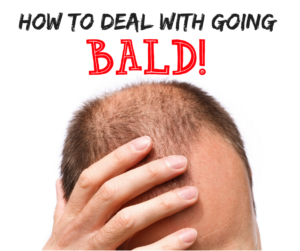 How to Deal with Going Bald

Here you'll find some ideas on how to deal with going bald, from possible hair regrowth treatments to the best haircut for balding men.

DON'T TRY TO HIDE THE FACT THAT YOU ARE GOING BALD!

Seriously, you will not be fooling anybody and will look very insecure.  And having the right haircut when you are balding will greatly improve your self-esteem and confidence.

I like to tell this story about one of my clients to show how dramatic it can be.

This guy was in his early 20's when he started coming in. He generally kept his hair short except in the front so he could try to hide the corners that were thinning.  As he continued to thin, he would go longer in front.  To the point that he looked like a poodle!  I didn't press it too much, but I recommended that he start trimming the front more. He refused.

During this time, we rarely had a conversation. He was always quiet and clearly tense the whole time he was in the chair.

He came in for a cut one day when I wasn't there and the other barber cut his hair.  But this time he decided to shave it all off. Right down to a #1 blade!

Suddenly this guy was loose and telling us stories!  He let go of his insecurities and his life improved dramatically because of it!

The moral of the story is instead of trying to cover it up, go with the right haircut.  A good receding hairline haircut is usually one that is just a neater version of how you are currently wearing your hair.

If you like longer hair and really don't want to let it go, get it neatened up at least.  Get a scissor cut and get it off the ears and neck.  Let your barber at least trim the ends on top.  Thinning hair usually gets frayed and curly at the ends and makes you look like a slob that is either trying to cover up his baldness or can't be bothered to take take of his appearance.

Again, if it is neat, you are not drawing attention to the fact that you are going bald.  The Caesar haircut for receding hairlines is one that works really well and looks very stylish.

I often have guys ask me, "Am I going bald? When should I shave it all off?"

A short haircut looks nice and neat.  You don't need to go extreme and shave it all off at the first signs of a receding hairline. Get a #2 clipper blade on the sides and short with the scissors on top.

If you part your hair, continue to part it but just keep it shorter.  Keep up with the haircut and don't let it get overgrown.

Should You Shave It Off?

How do you know when you should shave your head when you're going bald?

That isn't an easy one to answer.

It really depends on your personality more than anything.  As I mentioned earlier, it isn't like in the past when if you shaved your head you would look like some kind of psycho like DeNiro in Taxi Driver.  Nobody bats an eye at a guy who shaved his head.

That doesn't mean that every guy that is balding should do it, however.

If and when you decide to shave it off, you should read the best way to shave your head.

I'm really racking my brain trying to think of how to determine if you should.  I guess I can only share my own experience.

I shaved my head when I found that there just wasn't a haircut that I liked when my hairline was receding.  I was afraid of how people would react when I shaved it off, though.

People complimented me on how good I looked with a shaved head.

The big mistake I made was shaving it in the middle of summer, however.  My head was pale when my face and neck were very tan.  My advice then is to do it before the summer!

.  See how it feels to have an almost bald head. Get used to it then you can shave it off if you feel like you like the look.

Should you get a transplant? First, let me ask you this:

Have you ever seen a forest that was planted?  You know when you see one because all the trees are perfectly lined up.  That's what it looks like when you get a transplant.

Unless money is no object for you and you can have each hair individually inserted into your scalp, everybody will know you got one.  It just doesn't look natural.

If you are a regular guy getting it done, they will not place each hair individually onto the top of your head.  Usually the hair is transplanted in clumps, row after row.  Because that costs way less.

The other issue is that you will have scars on the crown of your head from where they harvested the hair to put on top.  They don't go away and you will forever have issues getting your haircut after that.

Another thing to consider is that when you fill in the thin spots, you don't know if you have finished balding yet.  You might continue to lose hair and then it becomes even more obvious that you got plugs. But, I do have some customers who have had it done and are happy they did.

I don't like how it looks, but if it makes you feel better and more confident, then maybe it is worth it to you.

Should you try Rogaine?

It could be an option if you want to at least give getting your hair back a try. It does work to regrow hair for some people and it's worth a shot anyway. Some people complain that you have to put it in everyday, but it only takes a few seconds.

You brush your teeth everyday, don't you? What's the difference?

It takes about 4 months to see any difference in your hair growth, so patience is key.  When it does start to work, your new hair will be very soft, short and downy type growth.  But, eventually the hair should grow into stronger strands.  Generally a couple of months after you begin to see the initial hair regrowth.

One of the determining factors of whether it will work for you or not is how long you have been balding.  It is best to start as soon as you see that your hair is thinning.  In most early cases, even if it doesn't regrow your hair, it will at least thicken it and slow down or stop the hair loss.

If you have been balding for a while or are totally bald you aren't likely to see results.  Expecting it to go from totally bald to full head of hair is definitely wishful thinking.

Check out Rogaine on Amazon for reviews and prices!

, that claim to keep your hair thick and slow down hair loss.  I don't have any experience with this product, but a quick glance at the reviews should give you enough to decide if you should give it a try or not.

There are mostly positive reviews, but quite a few negative ones.

Then there's this guy that claims to be able to regrow your hair naturally.  I cannot vouch personally for this treatment, but it does seem compelling and I have heard from people that something similar gave them decent results.

There is no magic bullet to easily regrow your hair to how it was before.   You're going to spend a lot of money and commit a lot of time to try to regrow your hair. You may see some results from some of the different hair regrowing treatments out there, but you have to be happy with whatever you get as nothing will restore your hair completely.

Final Thoughts on How to Deal with Going Bald

As a bald man myself, I say let it go.  Nobody cares.  You will be amazed at how much more confidence you have when you aren't worrying about if people are looking at your bald spot.

Know somebody who is bald and doesn't know how to deal with it? Share this on Facebook by clicking the floating icon to the left.